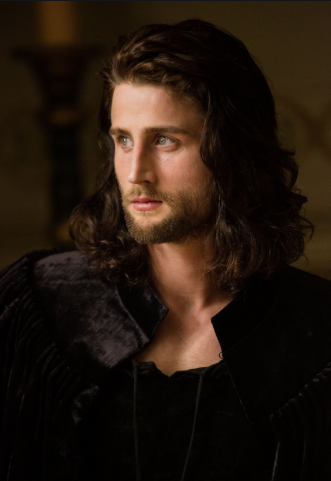 I have the pleasure to introduce Mark Ryder, a British actor from Nothern Ireland. He played the role of Cesare Borgia in the famous and historitical drama series Borgia of Tom Fontana. Cesare Borgia was the son of the pope Alexander VI and was famous for his art of war and diplomacy, his intelligence and his bloodythirsty/cruel side.

In this discussion Mark Ryder accepeted my invitation to respond to my questions about Cesare Borgia by sharing his experience, his interpretation, his point of view and his knowledge of one of the main characters of the series.

Auria: You are very curious and you wanted to understand historical background for interpreting the role of Cesare Borgia. Indeed, you have started by investigating history from the Italian renaissance untill Cesare Borgia.

What books helped to better understand this period and the character? How did you imagine Cesare Borgia when you started to read about this Cesare?

Mark Ryder: The very beginning of the shooting was really intense. I remember it was a 2-week shooting in CZ and I was spending the time by really working on the script, talking with Tom Fontana about the character and the series. I started to play Cesare Borgia without reading any books about him or about the period.

After that, I’ve chosen books to read (and Tom Fontana agreed on this selection) as The Artist, the Philosopher, and the Warrior: Da Vinci, Machiavelli, and Borgia and the World They Shaped. It was the really first book that I used for my research of Borgia.

I discussed a lot with Tom Fontana about the Borgia and about the history of Cesare Borgia. He shared articles with me, different chapters of books and even advised me to take a look to a specific passage. I’ve read 10 books about Cesare.

What was your vision of the character of Cesare Borgia during your research?

Mark Ryder: I had a naive view of the Borgia and my vision of him changed over time. He was a stereotypical guy, with a cartoon vision. Indeed, the only knowledge of this Borgia was a terrible person who poisoned everybody. I put this guy as evil, nothing good about him. But with time, I started to better see who he was: relentless, a lot of good and leadership. He built libraries, schools and he was interested in arts. Thus, the picture of Cesare Borgia became much more complex. He had definitively dark and evil face but at the same time a lot of love and passion. A surprising man.

The more I learned about the project and him, the more I loved him. He’s a phenomenal character in history. I really loved playing Cesare Borgia and I wanted to understand what he did.

Tell me if I’m wrong but you have studied psychology? What about Cesare Borgia and the Id, Ego and Super-Ego of Sigmund Freud?

Mark Ryder: Indeed, I studied psychology when I was younger. Cesare Borgia is always in conflict between his extreme impulsive behavior, his desire of pleasure and his rational, his sensible mind. The Id and the Ego.

The relationship between Lucrezia and Cesare Borgia was strange. She seemed to love her brother but also hated him for all the murders that he committed. Cesare seemed to love his sister deeply both as a sister and as a lover. Did they have sex? We will never know. In any case, I think that these two characters deserved to be analyzed by Freud.

Do you have a point of view about where does this strange relationship come from? I assume from his childhood?

Mark Ryder: Lucrezia was younger than her brother. They didn’t grow and live together, it’s like they were not brother and sister. Thus, there was a distance between them untill she became mature enough to marry a man. There was a sexual desire, something dark between two of them. There is no one in the world that could understand Cesare Borgia, except his sister.

Cesare was a kid. He never became a man. He had a boy mentality, even in the time he died. He was never fully resolved. Lucrezia helped him to grow. She was the balance.

Lucrezia could be the ego (rational) and Cesare, the id (extreme emotions).

You, Mark Ryder, and Cesare Borgia

Cesare Borgia and the series

It was the first time that I played that long and spend that time with somebody (Cesare Borgia). From the episodes 5/6 (from season 1), I was trying to find my character. At the end of the season, I was conjoined with Cesare. Thus, It’s in the second season that I fully integrated with his mind, I spent 12 hours a day in someone’s in mind: walking, thinking, talking… It was a sort of union between you and the actor/character.

When the shooting of the series ended, there was a short period of “okay I’m dong the last walks around like him”. I was not spending anymore time with him. It’s not like I am him.

When the Pope died and Cesare had to work hard to survive. Basically, he was sick, Cesare tried to keep things together.

The desire to be great; stronger.  I love the idea of greatness, passion for life, willing go to extremes as Cesare was.

I was worried to play a character who was 17 years old and a general. I had, in my early 20’s, attended university like most 21/22 year olds. They are not leading armies and are not the prince of Romagna. I was worried If I was going to reach the level for the series. It was hard.